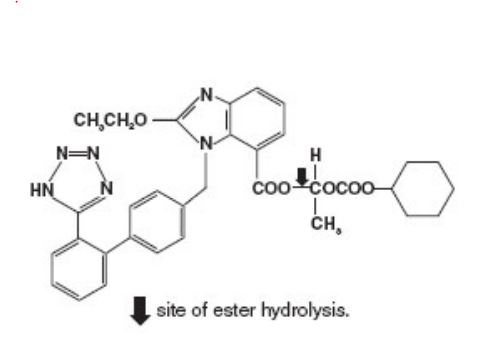 There is also an AT2 receptor found in many tissues, but AT2 is not known to be associated with cardiovascular homeostasis. Candesartan has much greater affinity (>10,000-fold) for the AT1 receptor than for the AT2 receptor.

Blockade of the renin-angiotensin system with ACE inhibitors, which inhibit the biosynthesis of angiotensin II from angiotensin I, is widely used in the treatment of hypertension. ACE inhibitors also inhibit the degradation of bradykinin, a reaction also catalyzed by ACE. Because candesartan does not inhibit ACE (kininase II), it does not affect the response to
bradykinin. Whether this difference has clinical relevance is not yet known. Candesartan does not bind to or block other hormone receptors or ion channels known to be important in cardiovascular regulation.

Blockade of the angiotensin II receptor inhibits the negative regulatory feedback of angiotensin II on renin secretion, but the resulting increased plasma renin activity and angiotensin II circulating levels do not overcome the effect of candesartan on blood pressure

Dr. Reddy's API business thrives on the deep technical strengths established over the last 30+ years in the development and manufacture of complex APIs such as steroids, peptides, complex long chain molecules and highly potent APIs (HPAPIs / oncology drugs). This expertise is complemented by our prowess in intellectual property and regulatory affairs which helps us consistently meet and exceed regulatory standards. Dr. Reddy's Candesartan Cilexitil API is the outcome of the extensive expertise in R&D, IP, and Regulatory.

Products protected by valid patents are not offered for sale in countries where the sale of such products constitutes patent infringement. Availability may be restricted to certain markets or countries. Please Contact Us for more information on availability and product suitability.

All product information, including that with regard to active pharmaceutical ingredients (API), the indication, and possible mechanism(s) of action, is based on publicly available product label.