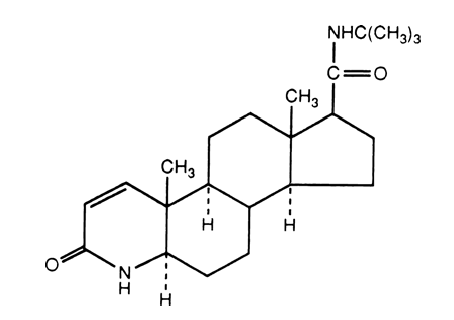 Finasteride is a competitive and specific inhibitor of Type II 5 alpha-reductase, an intracellular enzyme that converts the androgen testosterone into DHT. Two distinct isozymes are found in mice, rats, monkeys, and humans: Type I and II. Each of these isozymes is differentially expressed in tissues and developmental stages. In humans, Type I 5 alpha-reductase is predominant in the sebaceous glands of most regions of skin, including scalp, and liver. Type I 5alpha-reductase is responsible for approximately one-third of circulating DHT. The Type II 5alpha-reductase isozyme is primarily found in prostate, seminal vesicles, epididymides, and hair follicles as well as liver, and is responsible for two-thirds of circulating DHT.

In humans, the mechanism of action of finasteride is based on its preferential inhibition of the Type II isozyme. Using native tissues (scalp and prostate), in vitro binding studies examining the potential of finasteride to inhibit either isozyme revealed a 100-fold selectivity for the human Type II 5alpha-reductase over Type I isozyme (IC50=500 and 4.2 nM for Type I and II, respectively). For both isozymes, the inhibition by finasteride is accompanied by reduction of the inhibitor to dihydrofinasteride and adduct formation with NADP+. The turnover for the enzyme complex is slow (t1/2 approximately 30 days for the Type II enzyme complex and 14 days for the Type I complex). Inhibition of Type II 5 alpha-reductase blocks the peripheral conversion of testosterone to DHT, resulting in significant decreases in serum and tissue DHT concentrations.

In men with male pattern hair loss (androgenetic alopecia), the balding scalp contains miniaturized hair follicles and increased amounts of DHT compared with hairy scalp. Administration of finasteride decreases scalp and serum DHT concentrations in these men. The relative contributions of these reductions to the treatment effect of finasteride have not been defined. By this mechanism, finasteride appears to interrupt a key factor in the development of androgenetic alopecia in those patients genetically predisposed